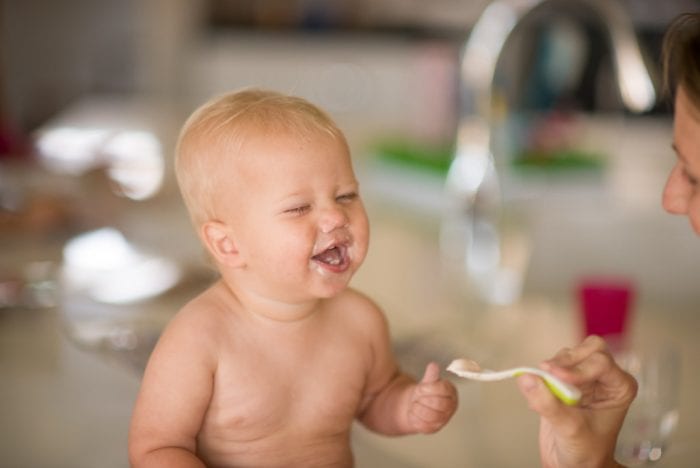 Toddlers can be picky eaters! However, there is a difference between not eating certain foods, and ignoring foods altogether and just drinking milk. If your toddler is having trouble eating foods and instead swears by a glass of milk, here’s what you can do.

First, How Much Milk Does Your Toddler Need?

If you’re wondering how much milk your toddler needs, then there is a good chance that you’re overfeeding them and this is leading to the toddler drinking too much milk. A toddler between 1-3 should have low-fat milk, and shouldn’t have more than 16 ounces, or 2 cups.

Many sippy cups your toddler drinks out of may be quite big, and have around the amount of milk your toddler needs every day.

Often, parents treat their toddler’s sippy cups like how a waiter treats the empty glass. If it’s empty, they will fill it right up. While this comes from a good intention, we also have another restaurant comparison. Drinking too much milk is like getting full off the appetizers. There’s a reason why your toddler may not be eating their foods: they are simply too full! While getting full of milk doesn’t seem like a bad idea, there are some side effects that could happen.

According to the Academy of pediatrics, a child shouldn’t have more than 24 ounces of milk each day if they’re between the ages of 1-2.  The milk shouldn’t be fat milk either.  Some parents make the mistake of giving their children fat milk, but the American Academy of pediatrics say that skim milk is better, since it helps stop weight gain. Children under the age of one shouldn’t’ be given any milk each day unless it’s from the parent.  Having more than three cups of milk each day isn’t recommended.

While the American academy of pediatrics isn’t the end-all of course to how to feed your child, understanding that giving them too much milk each day can create issues.

Switching from milk to other foods is good for motor skills, specifically oral motor skills.  Your child is growing, and they’re learning how to use their bodies, and improving their motor skills help them become functional adults.

Oral motor skills are learned immediately, but they’re developed over time. If you’re never having your child eat and just drink milk, then their oral motor skills can be stunted.

If your child is having significant issues with this, then they can see an occupational therapist in order to help assist them with the problems at hand.

Side Effects From Drinking Too Much Milk

Milk is good for growing body, but there is such a thing as too much of it. If your toddler is drinking too much milk, it can lead to some health problems, such as:

Iron deficiency anemia. Milk doesn’t have much iron in it; in fact, it can prevent iron from being absorbed. If your toddler is drinking too much of it, they may not be getting enough iron in their body, and that’s no good. To make matters worse, too much milk can cause a toddler to have a reaction in their intestines where they lose blood. It won’t hurt them, but it will reduce their iron even more.

Constipation. Milk lacks fiber, so your toddler may feel constipated if they drink a little too much. That’s an uncomfortable feeling.

Then, there are the lactose intolerant toddlers, who may get a  little sick because of the milk, but keep drinking it anyway. That’s never good.

Stopping Your Toddler From Drinking Too Much

Portion control. You may fill up your baby’s sippy cup, and that can lead to your toddler getting full of milk alone. Instead, fill it up halfway, and they’ll drink what they have. This can help your toddler wean off milk.

If you haven’t done so, lower the fat amount of milk if it’s not low fat or skim milk.

If your 2 year old won’t eat any food, they may have a food aversion.

A food aversion is when your toddler refuses to eat certain foods if any foods at all. This is common in many toddlers and is a theme you may run into during their development. If your child has a food aversion, what can you do as a parent?

You may be tempted to punish or bribe a toddler, but that never works. Instead, lowering the amount of milk they drink and showing them new foods can help. If you want to, your toddler can join you, supervised of course, in the kitchen and this can make preparing the food more important for your toddler. Give them foods with many different colors and textures.

Also, you need to set an example. If you’re not eating properly and eating like trash, your toddler may take you as an example and not eat so much.

If everything you’ve tried doesn’t seem to work, you may want to take a toddler to a doctor and see if there’s another reason why they refuse to eat and only want to drink milk or other liquids.

Also, keep trying. It can take a toddler many different tries and tastes before they like a new food. It isn’t a case where they try a new food once and are instantly a fan; usually, it may take them a long, long time before they eat the food you want them to.

When Not To Worry

With that said, your toddler should eventually grow out of drinking just milk. There are sometimes when you shouldn’t worry as much, including:

If your child’s iron levels are good. You can test blood levels through your pediatrician, and they can see if your kid is anemic or not.

If your child is at a healthy weight for your age.

Don’t get us wrong; your toddler should eventually transition to foods, but if they don’t seem to be harmed, there is less of a foul in our eyes.

What To Do About A Picky Eater

Some children are picky eaters, and they may drink milk because their eating habits are strange.  A child may not be eating a variety of foods, and oftentimes may consider only having milk and juice.

Dealing with a picky eater is hard, because you want your child to eat, and if they’re only having empty calorie foods, they might be gaining weight without the added benefits of food.

Young children might become picky eaters because they aren’t fans of the texture of new food, and they won’t eat something new because of this.

Some young children won’t eat because the new food tastes “strange” to them. But, if they don’t’ eat food that will help their bodies grow, it can affect toddler nutrition.

Introducing new food into a child’s diet is hard, and some young children might be hard to deal with. But, there are a few ways to help with this, so child development isn’t stunted.

Respect your child’s needs, and if they try a new food during lunch and dinner and don’t’ like it, understand it might take some getting used to. If your toddler doesn’t want to eat it, don’t’ force it. By forcing your toddler to eat food they don’t like, they may develop more of an aversion to it.

Talk to your child about these new foods, and find out why they don’t like them. Perhaps these healthy snacks have a weird type of texture to them, or maybe they’re not a fan of the color. But also, don’t be a short order cook and make them something new if they’re not going to eat it.  Have them stay at the table for a bit before you choose to let them have something else.

The toddler phase can be annoying at times, especially when you want your toddler to eat. Chances are, you were a picky eater once as well, and you just need patience. If your toddler doesn’t want to eat enough food and instead drinks their fill, just be patient, and remember one day, they’ll be eating with the family as well and having a great time.