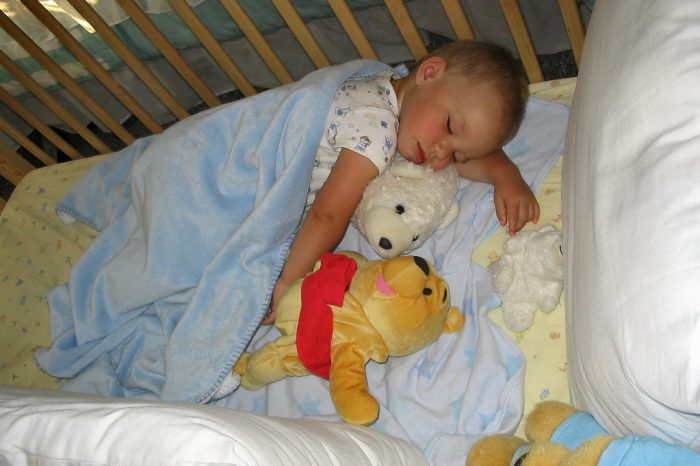 Ah, naps. As an adult, you may be jealous of how much your toddler is napping. They nap multiple times a day and then sleep at night. With time, your baby will need less sleep, and therefore nap for fewer times.

Eventually, it’s time to transition your baby to one nap instead of two.  But when do babies switch to one nap? For most parents, the baby naps in the morning, the afternoon, and then falls asleep at night.

You may wonder when a baby will transition from one to two naps. We will explain why.

During the baby and toddler stage, babies need lots of sleep. This is because they are quickly developing, and all that growing needs energy. A baby usually gets this rest by napping a few times a day and sleeping at night. However, as a baby grows, they need less sleep. They’ll stop napping, then drop naps altogether. This is a natural part of childhood development. If your baby sleeps a lot, it’s perfectly normal, and you should let them rest!

When Do Babies Transition?

So when do babies switch to one nap? When it comes to baby goals, it all depends on the child. Some babies will transition early, others a bit later. Usually, around the 12-18 month range is when babies are ready. On average, it’s 15 months. Some babies do transition early, while others are a bit later. There is nothing wrong if your baby wants to nap a little bit more. Eventually, they will grow out of it, so let them have some sleep.

If your baby is in the age range to transition from two naps to one, you shouldn’t force it. Forcing your baby to make the change when they’re not ready will lead to a fussy baby and an angrier parent. It’s just not the ideal thing to do. The same applies to any other transition. Forcing your baby to walk, potty, and do anything else can make the problem a lot worse.

Instead, look for the signs. When babies are ready to transition, they will often show signs. Let’s look at the signs.

Your Baby Refuses One Of The Naps

Have you tried to let your baby nap and they refuse? They may have a hard time falling asleep, say no, or continue playing. It may be because your baby no longer needs a nap.

Now, if they do this once, they may just have a little extra energy that day or a bit of insomnia. Make sure your baby is consistently refusing their nap for two weeks before you make the transition. Otherwise, you may end up having a false positive and making the problem a lot worse.

The First Or Second Nap Is Shorter

Babies who refuse the nap may not skip it altogether. Instead, they may make it shorter, and it seems like there is no point in doing it at all. This may mean that your child is ready to transition into one nap. If the nap times start to vary, this may be a sign that it’s time to give your baby a new sleep schedule.

Your Baby Is All Right Despite Missing A Nap

When a baby who is a two-time napper misses a nap, you’ll know. They’ll be fussy, crying, and grumpy. This is because they aren’t getting the amount of sleep they need. But what happens when your baby seems okay with missing a nap or two? This can mean that your baby is ready to transition to one nap, especially if they’ve been okay with missing a nap for two weeks or so.

A nappy baby will usually fall asleep in the stroller or the car. This is just a natural part of babydom. However, if your baby is still wide awake while in the car, especially during naptime, this can be a sign. Usually, a car ride just makes the baby more tired.

There Isn’t A Major Life Change Going On

Sometimes, your baby may have signs that they’re ready to transition from one nap to two. However, they may be in the middle of another transition. In this case, maybe it’s not time for your baby to transition, and that’s okay. Examples of life changes include the baby transitioning into another stage, a major move, the arrival of a sibling, and more. Let your baby learn to talk or walk first, then do it.

The Baby’s Night Sleeping Isn’t Off

If your baby’s night sleep feels like it’s been a little off, such as the baby waking up at night at more or waking up too early, fix that before working on any nap. You want to make sure that your baby is getting the most out of their night sleep before you transition naps.

It’s important to stress that your baby needs to show signs of needing just one nap for more than two weeks. It may be a phase, and you want about two weeks to make sure. Otherwise, you may end up with one cranky baby.

Here are some tips to make the transition easier.

The most helpful tip is to embrace gradual change. Sometimes, you may need to transition slowly and not too fast. Reduce the first nap’s time slowly, or slowly push back the time of the first nap until it matches up with the second nap. This can allow the baby to transition from two to one nap much easier.

Naptime is a great time, but when the baby is ready to reduce their naps, listen to them, and follow the signs. We hope we have answered your question ‘when do babies switch to one nap.’ Your baby is ready for more playtime and more learning, so make sure they are dealing with it the best way possible.

What are some signs that your baby is prepared to transition to one nap?

Generally, the approximate age for your baby to be ready for just one nap is between 15 and 18 months, and his nap usually shifts to the early afternoon, around 12 to 1 o’clock. If your baby’s naps in the afternoon become shorter, that may be a sign that he is ready to transition. Another sign to watch out for is when his naps are no longer regular, and the schedules become erratic – sometimes too early or too late.

How many naps does a one-year-old normally need?

The usual number of hours that a one-year-old spends sleeping during nighttime is 11 to 12 hours. As for naps, he normally has two hourly naps throughout the day, which totals his sleep to 14 hours.

What is the purpose of baby naps?

Baby naps are essential for the baby’s mental and physical development. Naps in the morning are more of REM sleep, and this is crucial for babies below one-year-old. So don’t rush to transitioning them because they do need these naps. Additionally, the length of their sleep is as important, too, as this affects their behavior and their mood.

What happens If I force to drop my baby’s naps to one?

Parents and guardians must not suddenly drop their baby’s naps to one, especially if they’re not ready yet just because the calendar says she must. Watch out for signs from your child – don’t look at the calendar. If you force it, this can interrupt their normal ways and hours of sleeping, subsequently depriving them of the benefits of sufficient sleep.

How many naps does a one-year-old need?

Usually, one-year-old babies sleep for approximately 11 to 12 hours during nighttime and take a total of two hourly naps, which makes a total of 14 hours a day of sleep. When he is two, he usually sleeps less, and his naps lessen from two to one a day. If your baby still naps two times a day, however, you don’t need to force it. What’s important is that he gets the sleep he needs.

Is an 11-month-old too early for one nap?

Generally, 10 to 12-month-olds take two to three hours’ total of naps a day. However, according to research, some 11-month-old babies undergo a sleep regression and start transitioning from two naps down to one daily. It may be too early for them at this age, but the fact is, all babies grow differently. It may be appropriate for one baby to transition at 11 months, and for some, it may take them up to 12 months to shift.

Most doctors agree that it does more harm than good to allow your baby to sleep for three hours and above. This might affect his normal sleep schedule, making him more active at nighttime. You can wake your baby up from his 3-hour nap so he can be ready for his next nap or his long sleep in the evening.

When should your 11-month-old take a nap?

At 11 months, your baby could probably sleep throughout the night without waking up to feed. They also take two naps, about an hour to an hour and a half per nap. The naps are usually midmorning and midafternoon.

Is there a 10-month sleep regression?

Yes, there is, although there is nothing to worry about. Is may not happen to your baby, but it can happen to other babies. At ten months or even below ten months for some babies, sleep regression can begin due to particular developments that the baby is undergoing. When they are learning new things and are curious, they don’t seem to remember to sleep, or they don’t like to sleep at all!

What time should a 10-month-old go to bed?

The general rule is that all naps must end at 4 o’clock in the afternoon, and bedtime must be around 4 hours after that last short sleep ended. Based on this and on a majority of parents’ experiences, a good bedtime schedule for a 10-month-old is between 7 and 8 o’clock in the evening. You can shorten his nap time, so he can sleep better if he frequently wakes at night.