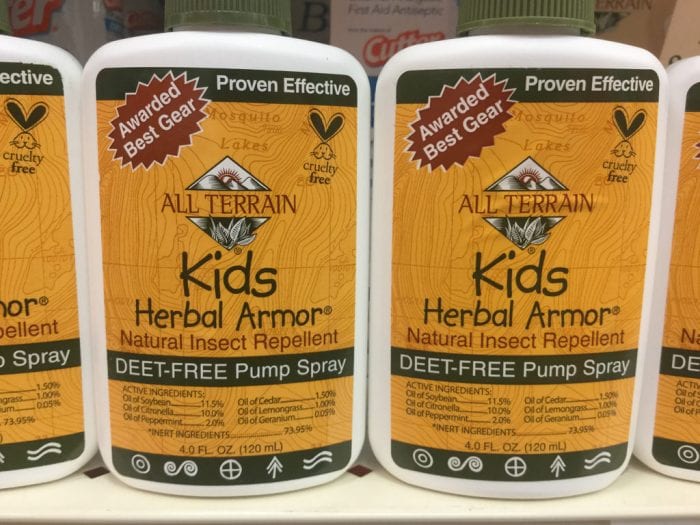 When you live in the countryside, it is impossible to stop your children from playing outside all the time. They may want to sort rocks, roll on the grass, or inspect various florae out of the house for hours. If there are other kids their age in the neighborhood, they might run around the field or play different outdoor activities with them.

Although letting your little ones enjoy and explore things outside your home is excellent for their cognitive and sensory development, you should realize that the green setting makes them susceptible to bug bites too. Mosquitoes tend to breed in stagnant water that may be in an empty flower pot or a shallow hole in the ground, after all. Ticks love staying on shrubs and bushes as well.

If you want to protect your young kids from insect bites, you should learn how to pick the best bug spray for toddlers today.

N, N-Diethyl-meta-toluamide, which is more commonly abbreviated as DEET, is a chemical that you will see in most insect-repelling products in the market. It is very useful when it comes to making the bugs dizzy with its smell. Hence, instead of trying to suck the blood out of your child’s skin, they tend to fly away as fast as possible.

Despite DEET’s efficiency at high concentration, though, the American Academy of Pediatrics (AAP) says that kids only need less than 30% of this ingredient in a bug spray. That percentage is excellent enough for five hours of protection. If it exceeds that number, it may become dangerous for the child.

2. Look For Picaridin In The Ingredients Too

One alternative to – or a great combo with – DEET is picaridin, a chemical compound that may have a greater effectivity and is safer to use for children than the former. You see, this particular active ingredient does not give off a foul odor that the kids might inhale. It does not come from plastic materials as well; that’s why it is practically more eco-friendly compared to DEET. This is a great criterion for choosing the best bug spray for toddlers.

The reason for picaridin not being much popular than N, N-Diethyl-meta-toluamide is that there are already a lot of studies related to the latter. Nevertheless, you pretty much need up to 10% of picaridin in the insect repellant for it to work for eight hours at maximum.

3. Opt For A Product With Citronella Or Catnip Oil

Considering you mostly believe in organic stuff and do not want synthetic compounds touching your toddler’s skin and possibly entering his or her bloodstream, you can look for bug sprays with essential oils as active ingredients. Many plants have natural properties that can repel insects, after all. With the right formulation, the effect of the solution can be as strong as the ones created in the laboratory.

Take note that among all the plants you can extract essential oils from, citronella and catnip have the best record at shielding someone from ticks and mosquitoes. The only downside here is that you’ll have to re-apply the repellant more than what you do with DEET- or picaridin-filled solvents.

To Sum Things Up

The best bug spray for toddlers, to be honest, is something that can keep the insects away from the babies for hours. It should also not be harmful to the little ones’ health because you can’t know then what’s worse: having your child bitten by a mosquito or allowing him or her to experience side effects from the chemicals in the product. You may choose natural disinfectants, for sure, but you have to research the effectivity of each ingredient composing the bug spray.

Once you manage to consider everything mentioned above, you will undoubtedly be able to find the best bug spray for your kiddos.

What kind of bug spray is safe for toddlers?

Studies claim that insect repellants that contain DEET are safe for kids younger than two months. Repellants containing DEET are sold at different strengths. Some have 30% DEET, while others have 40% to 50%. However, this doesn’t mean that the higher the concentration, the stronger it is. It only means that the substance lasts longer.

Is DEET safe for toddlers?

Studies and clinical trials have proven that DEET is safe to use for kids that are two months and above. But the prescribed amount of DEET is limited to a range between 10% and 30% concentration in the repellant. A lower concentration is recommended, especially for kids who will be outdoors for just one or two hours.

What are the best insect repellents for children?

According to Verywellfamily, the overall best insect repellant for kids is OFF! FamilyCare Insect Repellent. OFF has a powder-dry finish that doesn’t leave the skin greasy or oily. It effectively repels biting flies, ticks, fleas, chiggers, and of course, mosquitoes. And because it is in the form of aerosol spray, it can easily be applied in a sweeping motion. The best DEET-free repellant, on the other hand, is REPEL Plant-Based Lemon Eucalyptus, and the best wipes repellant is Cutter All Family Mosquito Wipes.

What are the negative effects of using DEET?

People who have tried leaving products with DEET on their skin for long periods claim to have seen rashes, swelling, irritation, and redness. Kids and teens who have accidentally swallowed products having DEET reported experiencing vomiting, nausea, and stomach problems. Seizures are also a rare negative side effect of prolonged DEET exposure.

Is DEET the same as DDT?

No, it’s not. To simply explain, DEET is a popular substance mixed with insect repellants that is safe to use on clothing and skin. DDT, on the other hand, was previously used in the agricultural area to eliminate mosquitoes. Still, it was later banned because of its toxic effects and its long-term negative impact on the global food chain.

Can you put bug spray on a 2-year-old?

Yes, bug sprays can be safely applied to 2-year-olds. The Centers for Disease Control recommends the use of bug sprays on children two months and above. You can use insect repellants on these ages provided that the DEET contained in the repellant sprays do not exceed 30%.

Is citronella safe for kids?

Generally, kids are mostly irritated with pesticides. Citronella, when applied on the skin, may cause skin rashes or allergic reactions on some kids and even adults. Thus, some products with citronella oil are not allowed to be used on kids that are less than six months old. Or better yet, consult your doctor about this.

Is baby oil a mosquito repellent?

Mineral oils like baby oil are great moisturizers for babies and adults. Parents love baby oils that have fragrance because they use it to massage their babies at night before they sleep. The creamy-type baby oils are not promoted as insect repellants by the company Johnson & Johnson, but several people who have tried using it as one claim that they effectively get rid of mosquitoes.

How effective is DEET against mosquitoes?

Insect repellants containing DEET are very effective in ‘repelling’ or driving mosquitoes away from a person’s body. They do not ‘kill’ mosquitoes and other biting insects. DEET does this by interfering with receptors and neurons that are found on the mosquitoes’ mouth and antennae – parts that sense carbon dioxide and lactic acid.