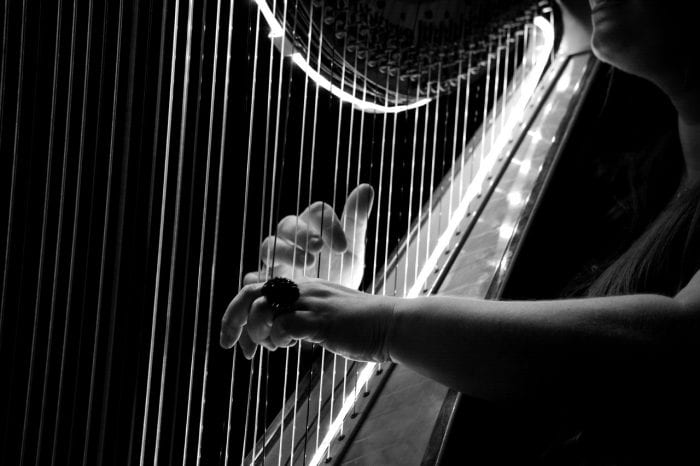 Buying a musical instrument for a child can help them discover their musical talent and show them just what they can do with a little bit of imagination. In this post, we will look at one instrument your child may love, the lyre harp. It’s a type of harp that has quite a history to it.

What is a lyre harp and how is it different from the other string instruments that were used before and today? Is it suitable for adults, kids, or even seniors? What is your favorite instrument – does it happen to be the lyre harp? Here’s more about the lyre harp.

We made a list of the best-selling lyre harps from Amazon, and we included a detailed description of each to give you an idea of what features it has. If you are new to the instrument, this article is an excellent source of information as it will discuss what is a lyre harp, how a lyre harp plays, and more fun facts as you read further.

Lyre Harp As An Instrument Of The Ancient Greeks

The lyre harp is best known as being an instrument of the ancient Greeks. Chances are, you’ve seen a depiction of an ancient Greek playing lyre. It is because the lyre harp was quite remarkable, along with the other stringed instruments of the time. Other instruments include the chelys, the kithara, and the phorminx. In Greek legends, Hermes created these instruments from a tortoise.

Continue reading about the lyre harp below and learn more about the different facts. 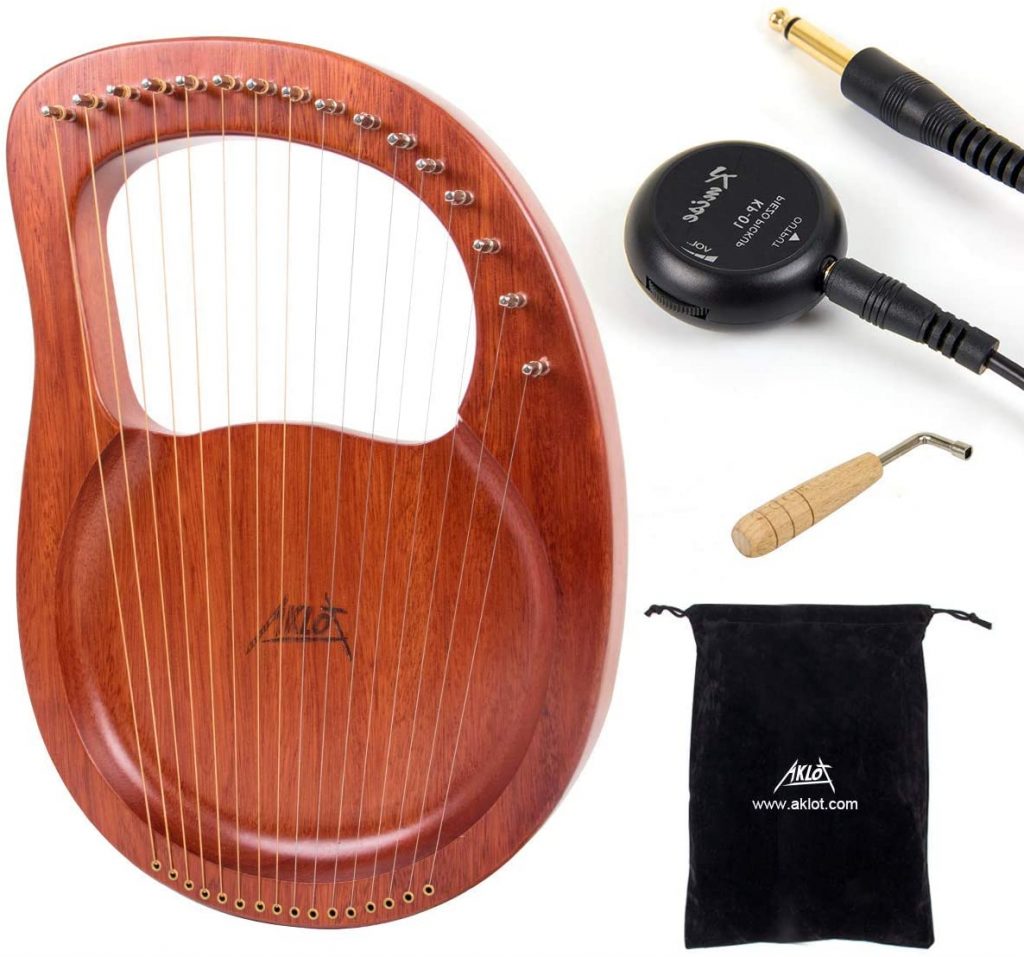 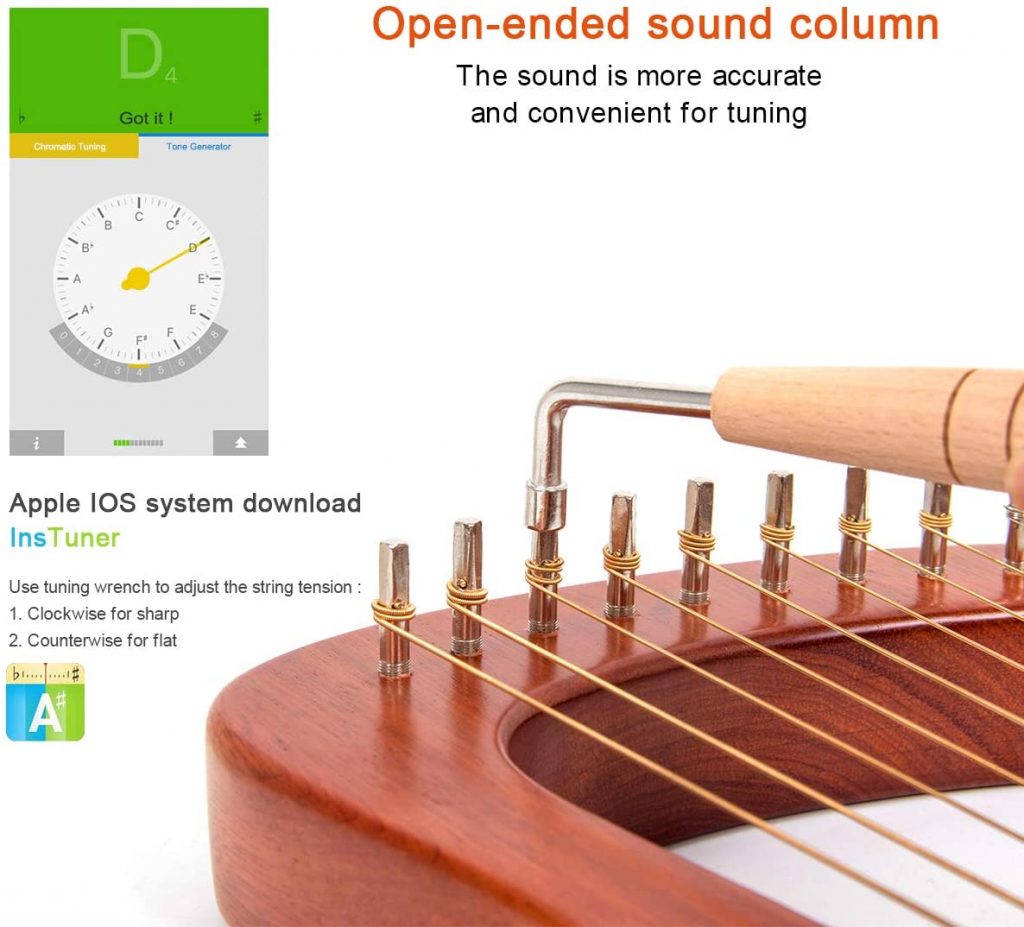 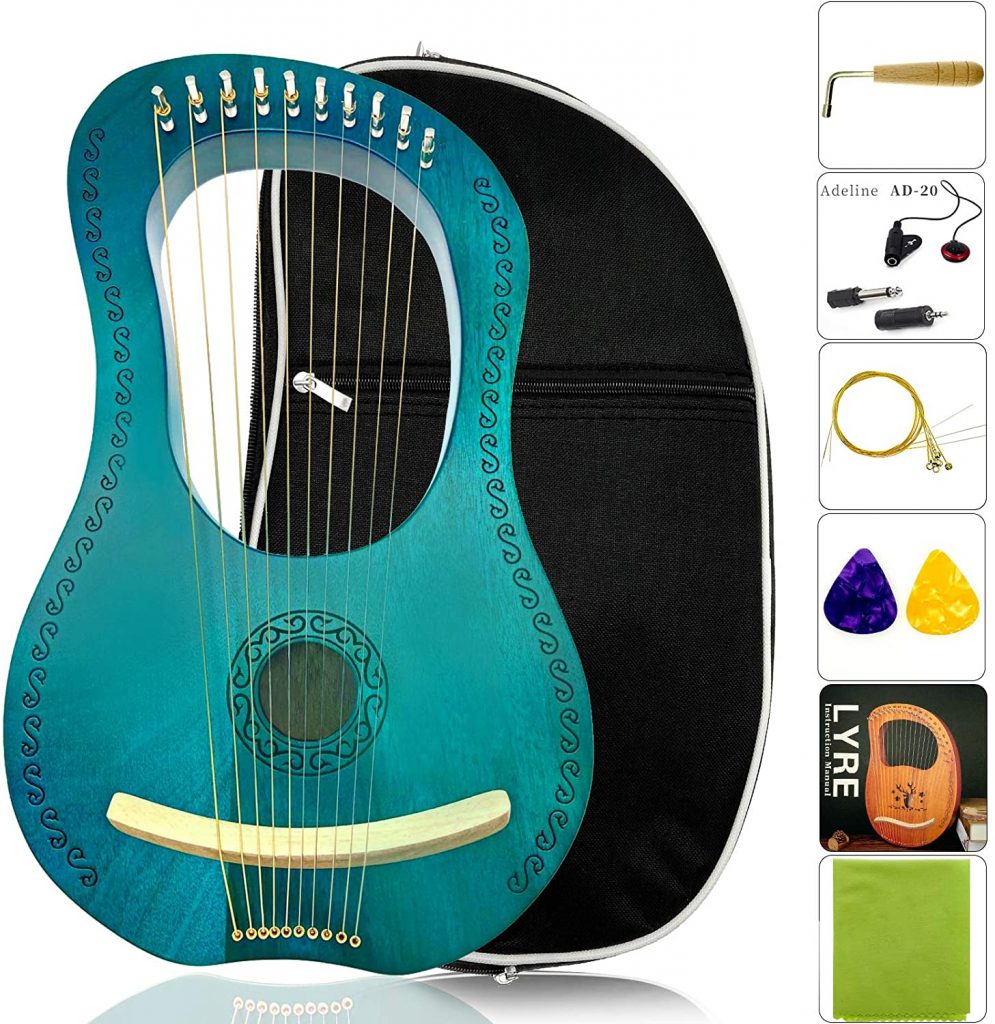 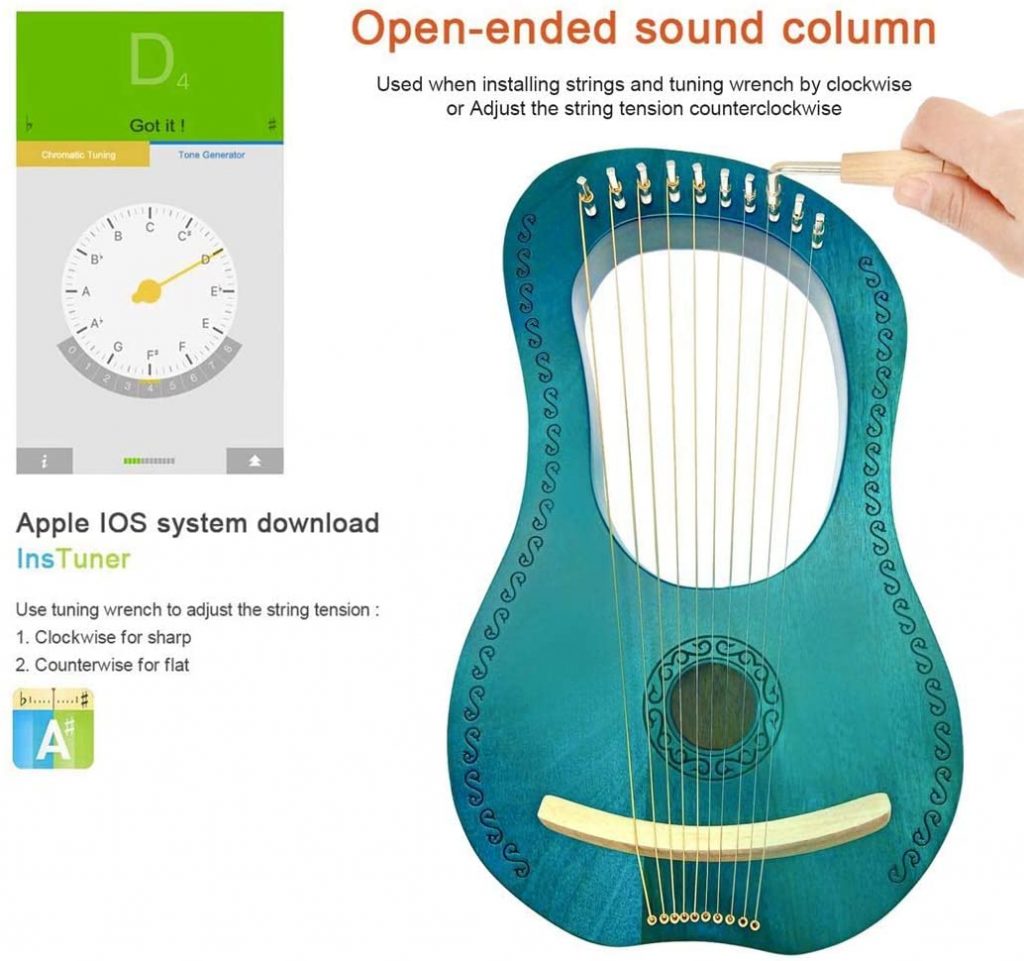 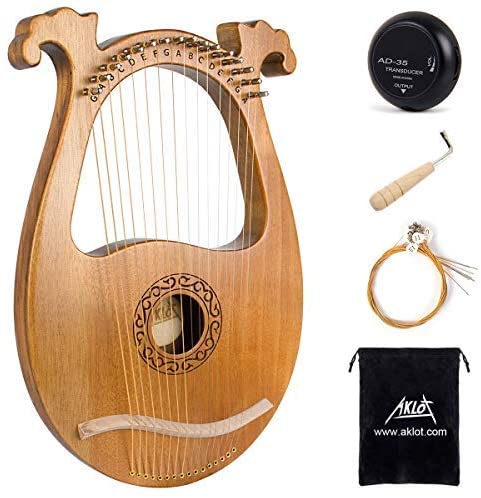 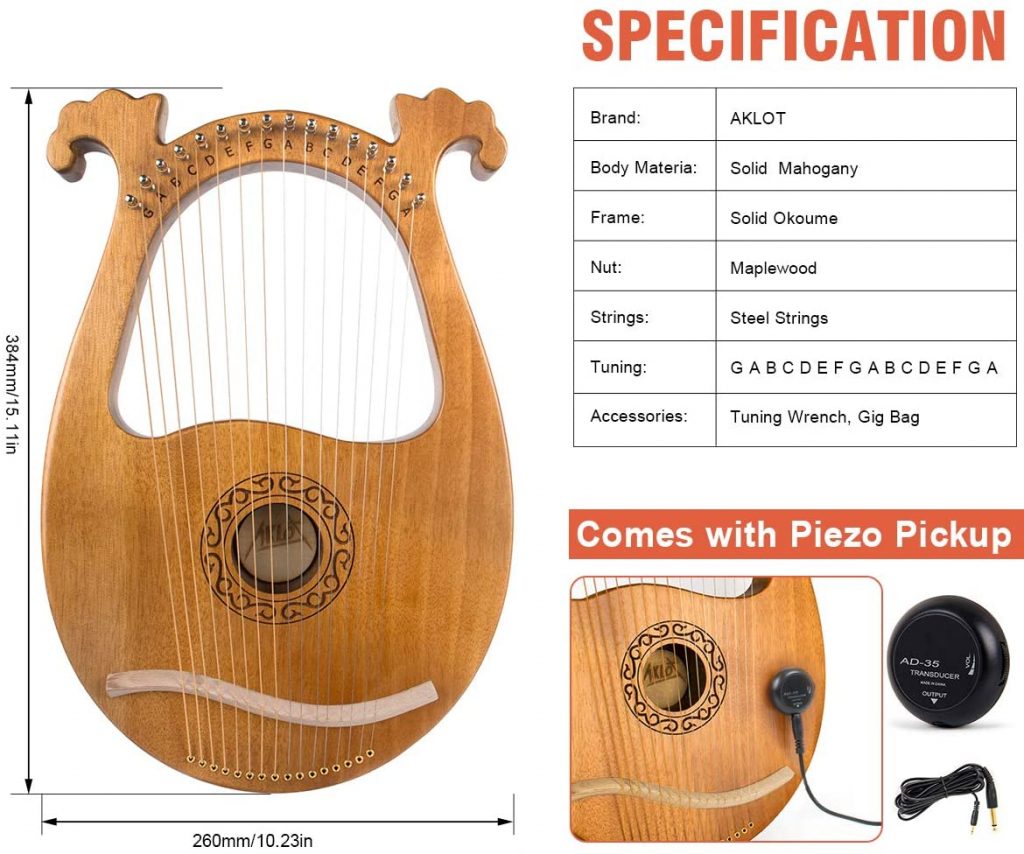 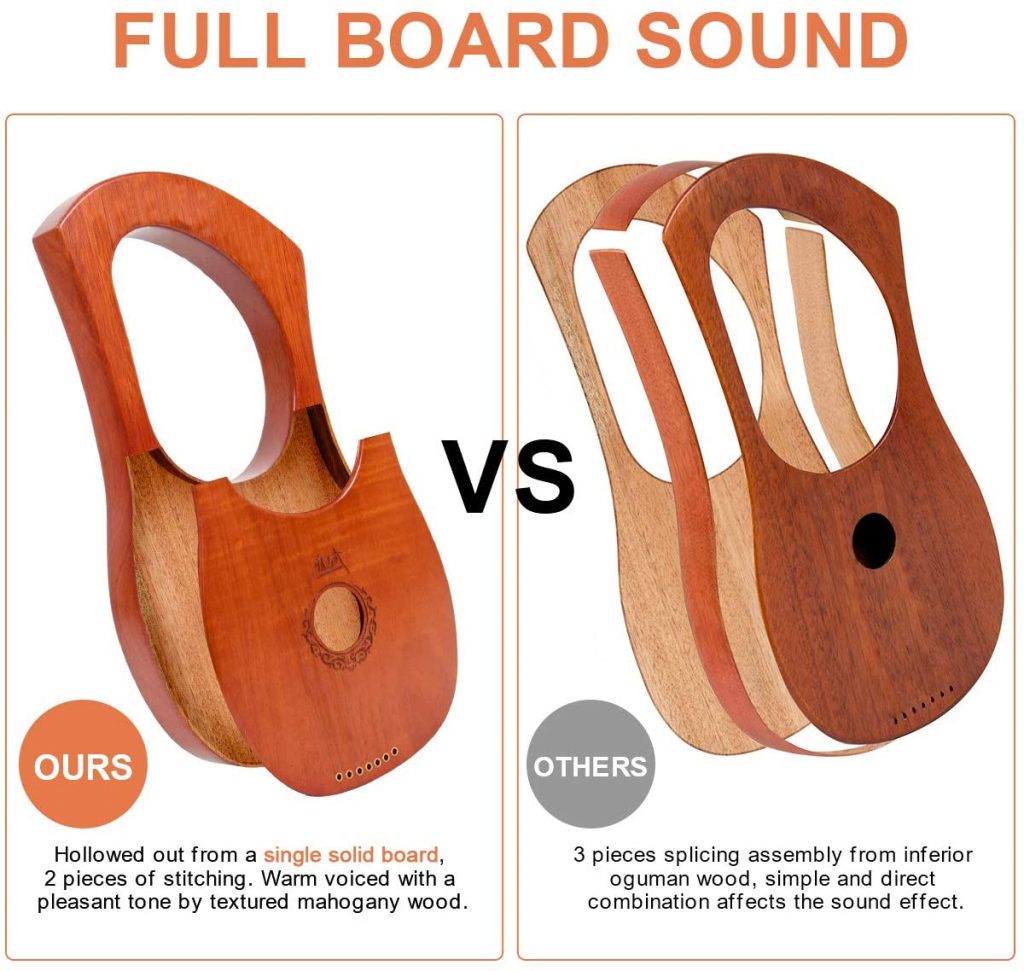 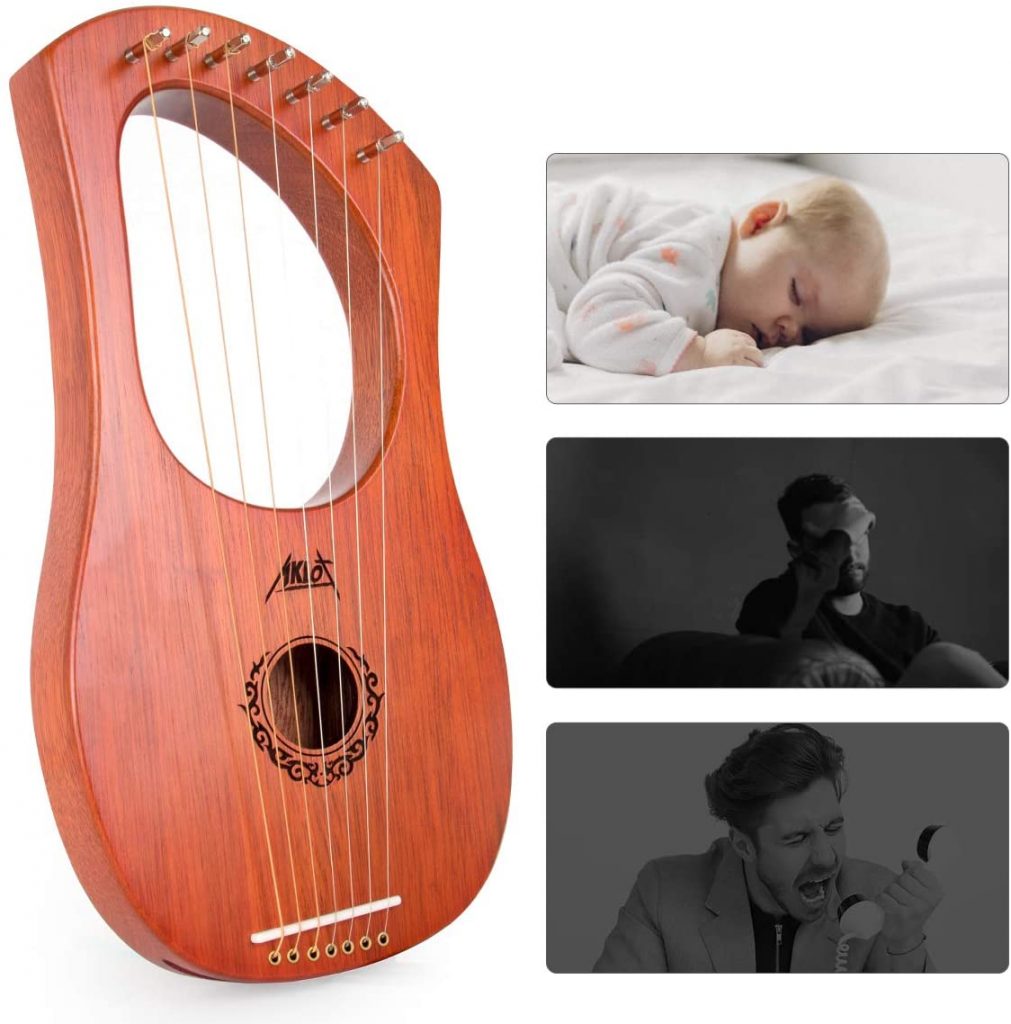 The lyre harp is played by itself or with a singer. It is present in many depictions, as Greeks valued music. Music was a big part of education. We need more of that type of training in our schools. You can find depictions of it on coins and even in modern times.

While you won’t be able to summon a Greek god with a modern lyre harp, it makes for a great instrument and an excellent way to introduce your kids to the world of music. Indeed, it is an instrument for the old and new.

They have quite a few fun facts about the lyre harp. Let’s look at a few of these facts.

The word “lyre” comes from the word “lura.” Lura means a stringed instrument that has a tortoiseshell sounding board.

Indeed, the original lyre harp did come from tortoises. Not only that but sheep guts were used to make strings. Nowadays, no animals get harmed in the making of lyres.

The amount of strings a lyre harp has is always changing. Some depictions of lyres have had four strings, others seven, as some as many as ten.

To play the lyre harp, you need to pluck it with a pick. When you look at a classic lyre, it has a body that’s hollow. Many lyre players of ancient Greek times were male, but a few female players do exist.

The oldest lyre that has survived in modern times was found in Scotland back in 2010. This lyre is supposed to be over 2,300 years old. This lyre has been through a lot.

A lyre harp can be a part of the zither family, but not all people consider that to be the case.

The Lyre Is Called By More Than Just The Lyre

In Europe, it can be referred to with names such as gue, cruit, rote, crwth, and much more. No matter what language you pick, however, the lyre is still a lyre.

In Beowulf, they do mention a lyre. As you know, Beowulf is a classic epic poem that is an example of early storytelling.

While not played that often anymore, some places in northeast Africa still play with it.

While a lyre and a harp may be classified as the same, there are differences—the most notable is how the strings are. With a lyre, the strings go over a bridge. With a harp, the strings stay inside the body of the harp. Think of a lyre as more of a guitar than a harp.

About The Lyre Harp

The most popular Lyra in this area was considered the Cretan Lyra.

You Could Find One In Different Parts Of The World Too

In continental Europe, there was the Calabrian lira, which was a bowl-shaped lyre that many people used to play. A Calabrian lira was seen in Italy for the most part, and it is played like other lyres.  These were called lyres because they were played in the same way bowled lyres were played, and Calabrian Lira was called this because of the way that they looked, and the number of strings they had was similar to those of the ancient Greek and ancient Egypt Lyra.

The Ancient Egypt Lyra Was Similar To The Greek Counterpart

You did see this in some parts of northern Europe too, and these stringed instruments were incredibly popular amongst many in that area. The Normans in particular loved the Saxon lyre, which was a small lyre seen in many Anglo Saxon areas. In Northern Europe, this was brought to the Anglo Saxon people and became known as the Saxon lyre amongst many. The Anglo Saxon lyre is considered one of the most important types of stringed instruments that were in the world during that time.

There have been composers for music on the lyre too, including Michael Levy

Although some of these weren’t totally considered lyres, they were similar enough to lyres that they were given the name. They have been around for thousands of years, and offer a lot of fun, enjoyment, and different ways to play.

There were quite a few that were called lyres, and it’s important to understand that there were some which were quite different from the ancient Greek lyres. The traditional ones are stringed instruments, and while they don’t have a sound chest, you typically played them with your left hand.  The other variants are also played with your left hand.

There were bowed lyres, one of the most popular being the welsh Crwth lyre. The welsh crwth lyre involved manipulating the vibrations of the strings with the bow, and it moved through the sound chest outwards. They were called lyres since the Welsh Crwth were played like that. They are also called rote or crowd lyres, since they did have a bridge that transmits sound outwards. You typically play this one with your left hand.

Then there are yoke lyres. Yoke lyres are called lyres, but they’re really yoked lutes. The number of strings on yoke lyres is the same as some of the other stringed instruments with the same name, but the vibrations of the strings are transmitted through a longer neck. The long neck transmits the vibrations in different manners out of the sound chest.  The sound chest on these tends to also be more compact, and also put together.

Overall, the number of strings and the sound chest on these instruments are very similar, and you can get a lot of fun and enjoyment out of playing these stringed instruments.

When your child gets older, they may express interest in learning an instrument. There are quite a few instruments they can learn, such as a guitar or a piano. But if you want something different, a lyre may be one to consider. Here are a few reasons why your child may like one.

With your kid’s lifestyle, they may need an instrument more portable. A lyre is quite compact, and you can bring it wherever you go. Try it out today, and you’ll see your kid take it with you.

A Little Less Complex And Easy To Learn

You can find quite a few lyres online. Some only cost around $20. If you want a wooden, more authentic one, it still doesn’t cost that much. It’s only a small price for a great instrument. Replacing the strings shouldn’t be hard at all, either.

Kids may like lyres due to their beautiful sounds. They can be a great addition to a band or as a solo act.

Your kid can be a master bard by grabbing a lyre and singing along. If you’re ready to show off your kid’s vocal cords, it can teach them both skills easily.

Lyres Or Harps Are Decorative

These also look good as decoration pieces when your kid is not using them. It goes well in any household, guaranteed. If you’re interested, try it out and see what it can do for you.

Who else is no longer confused about what is a lyre harp and what it is not? The lyre is an instrument with a fantastic history and many chances for you or your kid to show off what it does. If your kid needs a lyre, you’ve come to the right place. Look at a few lyres and see which one is the right fit for your kid. It’s not only a great way to unlock your kid’s potential for music, but also an excellent way for them to learn more about the history of Ancient Greece. Try a lyre today and see what it can do for you and your entire family.

The lyre harp was extremely important in Greek mythology as Hermes used it to steal 50 sacred cattle from Apollo’s herd. Back then, it was made out of strings, gut, and tortoiseshell.

What does lyre or harp mean in the Bible?

Playing the lyre harp sometimes as a poetry accompaniment means that people are trying to drive out evil spirits. The Levites used to play the lyre harp in temples.

How many strings does a lyre harp have?

A lyre is a seven-stringed instrument. In the past, however, versions with four and ten strings also came out.

How does it make a sound?

The sounds are produced when you strum the strings with your fingers. The tension on the strings tends to alter the tunes.

Is it easy to learn to play one?

Playing the lyre is not as challenging as playing the piano. It is ideal for people of any age.

How much does a beginner one cost?

Harps differ in rates depending on how big they are, what type of wood is used, or how many strings they have. Still, a 12-string baby harp can cost as low as $144.

How does it work?

A lyre is similar to a modern guitar, in the sense that there is a bridge underneath the strings. Once strummed; therefore, this bridge will receive the vibration and distribute it to the rest of the instrument.